(The Juicys are a way to recognize and reward those churches who’ve worked to improve their church communications during the last year. It includes giving them a grant to jump start their next project. To see past winners, click here.)

Guiding a church through denominational change is daunting. Yet after realizing their church’s biblical beliefs and denominational stances didn’t match, First Presbyterian Church in Douglasville, Georgia, knew it was a step they had to take.

Not only were they faced with keeping the 55-year-old congregation of 650 people united, they were also met with a challenging process for leaving including raising nearly a half million dollars to keep their building.

“This type of change has split some congregations, but leadership knew that we wanted our church family to remain together,” explains Elder Melanie Gibbs. “We trusted God’s guidance and launched our ‘Together’ communications campaign.”

The old denomination’s process called for 80% of the congregation to vote for the change. Yet, FPCD leadership couldn’t imagine losing 20% of people they cared about, so they set the goal of getting 95% agreement.

While there were many tactical pieces that needed work, FPCD first spent time creating foundational strategy.

“Although there were specific outcomes we hoped to achieve, our central goal was to navigate this difficult process in a way that honored Christ and kept our congregation intact,” says Melanie. “In every decision, we returned to those fundamentals to see if our plans served the goal. We tried to convey to members that we did not expect every member to agree on all things, but they were valued as part of our church family. With the cross as the focus of the ‘Together’ logo, we hoped all would be reminded that Christ should be central to everything we as Christians do; although we may differ on some points, we are unified in Him.”

The denominational separation process was going to be long, with lots of moving pieces. FPCD decided to develop multiple communications teams to handle various stages of the process so that people had a manageable workload. Also, understanding that different members process messages in different ways, FPCD used a variety of means to communicate with members.

Melanie says, “In addition to the direct mail pieces, the team also had several signs made. We printed ‘Together’ stickers that many members seemed to enjoy wearing to show their support. We held some information sessions -- congregation-wide and with small groups. We published information in our church newsletter and bulletin inserts. We made leaders available between services to answer questions. And we posted some information on our church website, all in an effort to meet members where they were.”

Another important piece of the campaign was in-person and printed testimonies. Hearing from fellow members, instead of only church leaders, made others more comfortable with the process.

Finally, FPCD had a “Shepherding Team” who made an effort to reach out to each member in person during the process to make sure even those on the fringe felt like they were involved.

In the end, 95.5% of the congregation voted for the change. 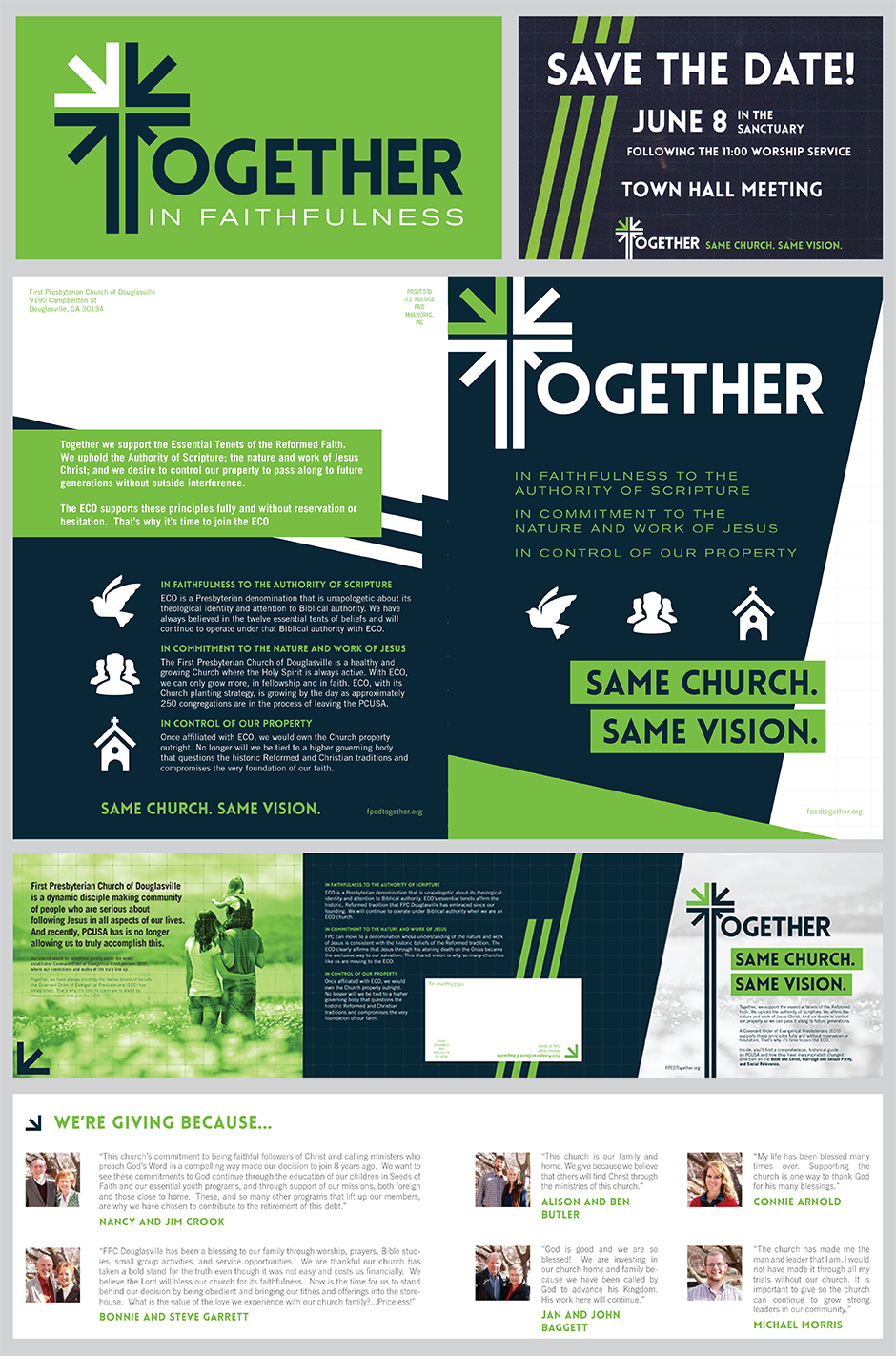 When it comes to major changes like denominational affiliation, it can often lead to church splits or even closure. FPCD leaned in to their belief God was calling for them to change and built a process that was thorough, intentional, personal, inclusive and cohesive. Not only did the campaign develop unity, but it’s also making the church more noticeable in their community. New people are coming -- helping FPCD thrive and not just survive.

In February, FPCD will host “Night to Shine” -- a prom night experience, centered on God’s love, for people with special needs 16 and older. It will be a true red carpet experience with limos, photos, catered food, a DJ, decorations and more.

“This is a significant opportunity to share God’s love with our community, particularly a segment of the population who may not regularly hear that they are valued, plus their families, who may not often have the chance to see their children celebrated,” says Melanie. “We would like to make our guests truly feel they are precious and loved. We hope to build long-term relationships with some individuals who may need a church family to walk alongside them.”