Knox-Met is a Juicys Winner

(The Juicys are a way to recognize and reward those churches who’ve worked to improve their church communications during the last year. It includes giving them a grant to jump start their next project. To see past winners, click here.)

For some churches, the idea of a newsletter might feel dated. But the truth is, if they’re done well, newsletters can still be an effective communications tool.

That’s the case for Juicys winner Knox-Met United Church in Regina, SK. The Canadian church of 125 members recently re-launched a newsletter after several years of hiatus. But instead of the boring black and white version of the past, this round features modern, clean, full-color design. The trick was to find a design that appealed to the church’s younger members without alienating the older generation.

“We steered clear of some obvious traps in designing for a younger audience. The type size of the text is just large enough for older eyes while not appearing too large for young people,” says Communications Director Dan Coggins. “We also avoided some design solutions that were not timeless like distressed type. At the end of the day, the newsletter has to give an upbeat, timeless look of a High-Church congregation.”

One of our judges agreed, commenting, “Knox-Met invested in making a contemporary newsletter and totally pulled it off. The content is well organized and the look is visually pleasing. It's perfectly scanable with well-executed callouts and use of bold fonts. This project serves as an example of how to make your church newsletter relevant in 2014 and beyond.”

Better still – the newsletter is working. Yes, younger people have told church leaders they’re reading the newsletters, which is also available as an interactive document. 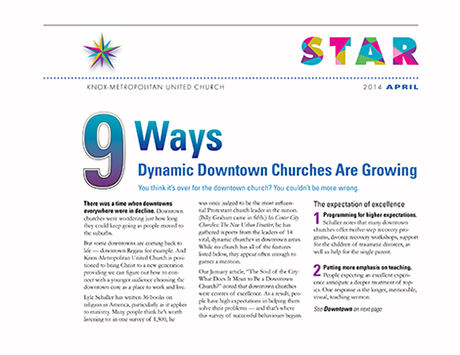 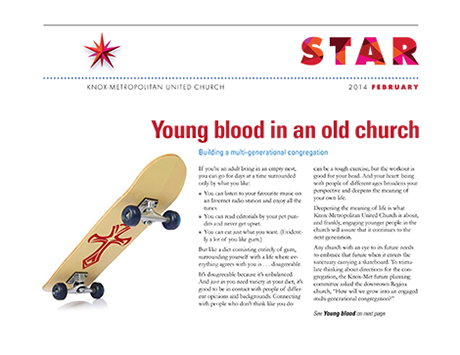 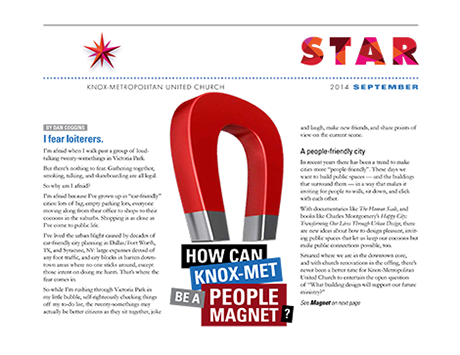 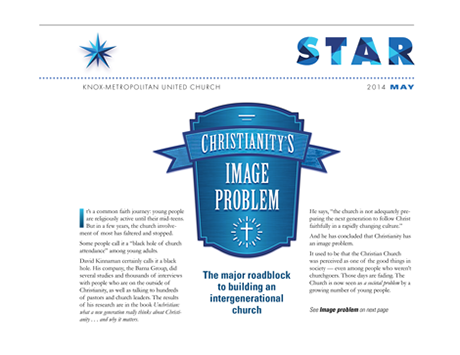 While closing the age gap in communications was a large goal, the biggest hope for Knox-Met was to use the newsletter to get people excited about the revitalization of the 125-year-old church.

The newsletter featured church members’ stories while also creating interest in where the church was heading in being a better part of their community. It’s also meant as a tool that can reach beyond the church pews to share the new Knox-Met with neighbors.

Coggins says, “After years of not formally reaching out, some can see their church as a social club. Our openness to strangers is also colored by current fears about crime and concerns around privacy. On the other hand, the communications endeavor — and Christ’s call to his disciples — seeks to connect with as many as possible.”

“We know what to say ‘yes’ to, but more importantly, we also know what to turn down,” explains Coggins. “It helps us choose from what are the necessities in a communications program and what are the ‘nice-to-haves.’”

The next necessity to focus on for Knox-Met is a new website. The church hopes to bring the same fresh look of their newsletter to their online presence.