Yahoo recently launched its new logo. It’s part of an overall brand refresh where the company has created some really beautiful products. I never ever thought I would use a Yahoo program on a regular basis, but the new iOS weather app is useful and visually stunning. I have friends who love the Flickr app, too.

The new logo itself is the latest piece of the overhaul. It’s fine. It’s nothing spectacular, but Yahoo executives think it’s a great expression of a newly reimagined and reinvigorated company.

My issue with the new logo is how it was released. In the month leading up to the reveal of the logo, Yahoo presented a different version every day. There were 29 logos attached to the company’s website before the new logo found its home. It was clearly a marketing strategy to get people in the habit of coming to the site more regularly. 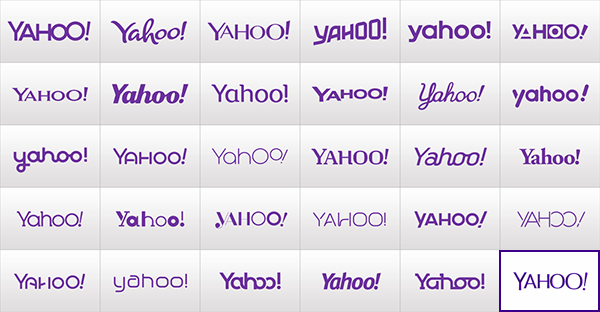 But rotating through 30 different logos comes with a cost.

So why does all this matter to churches? Well, I think too often, when a congregation changes its logo, the launch doesn’t go as it should. We get so excited about the work we’ve done that we start putting the new logo on things before it’s ready or finalized. Or even once it’s done we put it on some things without changing others. Then there are multiple versions of logos all over the church.

If you’re looking for a more detailed explanation of why a uniformed logo launch is important, here’s a link to a post I wrote two and a half years ago. It looked at the rollout of Caribou Coffee’s redesigned logo. Around my house, they still haven’t changed the signage.